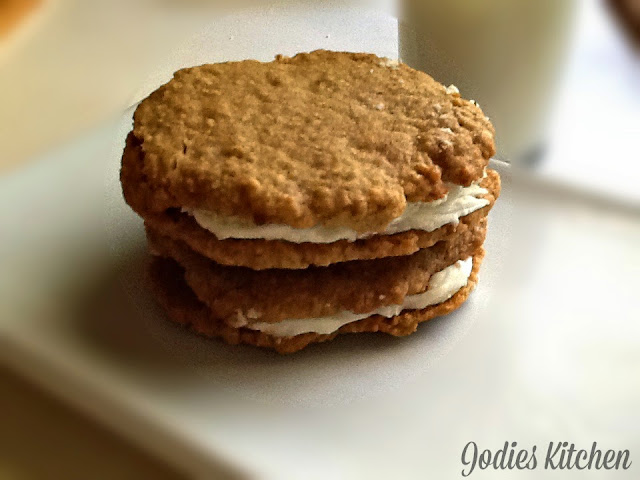 Oatmeal cream pies have always been found in my house.It is just something about the soft texture of the cookie and that delicious sweet filling.
It wasn't until I met my husband and had his mother's homemade oatmeal cookies that I realized how good the homemade taste.
Honestly I had never even thought about trying to make them.I always just bought them from the store and trust me, I love the store bought version.
Neither of the two homemade versions are just like the store bought, but is a very cookie and and suits us as a great alternative.

As a matter of fact, my mother n laws version is my oldest sons favorite.She always makes them for his birthday and christmas now.He would much rather have the homemade over the store bought.As for me I like them both equally.

Recently I was sending my son a care package and wanted to include some homemade goodies for him.I knew I had to include the oatmeal cream pies for a great taste of home.
One problem... I didn't have my mother n laws recipe.
So, I go to pinterest and start scrolling.Looking for something that looked as close as possible to my mother n laws version.Well the picture anyway.I really only knew a few of the ingredients she actually used in hers.
While scrolling I ran across a picture that really caught my eye from Sally's Baking Addiction.
When reading the recipe I knew these were not going to be like my mother n laws version because of the spices that this recipe had in it.But honestly they looked so good I could not resist making them anyway.
I did decide to cut back slightly on the spices just because I was making them for my son, and I didn't want them to be so different that they didn't remind him of his favorite. 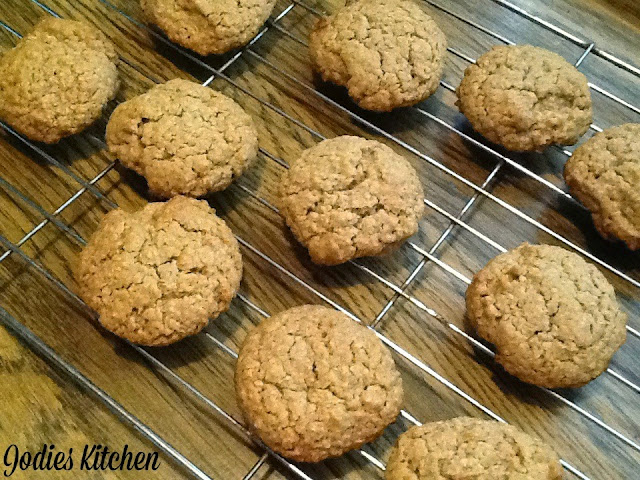 One thing I have found when making this recipe and I also noticed it with my mother n laws cookies as well, is the cookies were a little thicker than I wanted.I decided to flatten out the cookie with my hand before baking when doing the other batches. 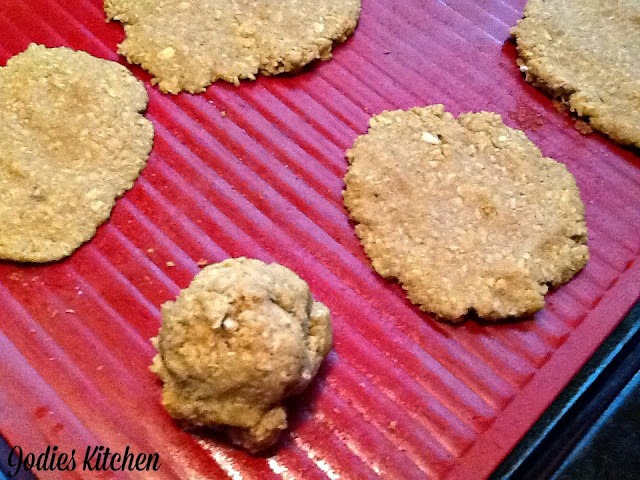 This seemed to work very well for me and gave me the thinner cookie I was looking for.

I wasn't sure how the filling was going to hold up during shipping since it would be 2 days before my son would receive his package.Now, this didn't occur to me until after I had made them and realized the filling had butter in it.I was about 100% sure the filling recipe I was following was not the same as my mother n laws which didn't have butter.I was correct after getting her recipe later on.
But I had already made and packaged these so I crossed my fingers when they arrived that the filling had held up.
I got a call from my son and he said his care package had arrived and the cookies were perfect.
Unlike the bottle of BBQ sauce that was also included in the package.It busted during shipping and had sauce all over everything in the box now.Thank goodness everything was wrapped well so my oatmeal cream pies or the other things didn't taste like BBQ sauce.

He told me he could tell they were not the same cookie because of the spices but he liked them just as good.I felt the same way as did everyone else who has had both of the cookies.

Jodies Kitchen Spiced Oatmeal Cream Pies
COOKIES
1&1/4 cup unsalted butter (room temperature)
1 cup packed dark brown sugar
1/2 cup granulated white sugar
1 large egg (room temp)
2 teaspoons vanilla extract
1 tablespoon dark molasses
1&1/2 cups all purpose flour
1 teaspoon baking soda
1/2 teaspoon salt
3/4 teaspoon ground cinnamon
3 cups UNCOOKED QUICK OATS (not whole rolled oats)
FILLING
3/4 cups unsalted butter (room temp)
3 cups confectioners sugar (powdered sugar)
3 tablespoons whole milk
1&1/2 teaspoons vanilla extract
Preheat oven to 375F.Line a baking sheet with parchment or baking mat and set aside.
For the cookies:Cream the butter, brown and white sugar together until creamy.Add egg, vanilla, molasses and continue beating, scraping down sides of bowl as needed until light and fluffy.Set aside.
In a separate bowl, combine flour, baking soda, salt, and cinnamon.Then add oats and mix well together by hand.With the mixer on low speed, slowly add the dry ingredients to the wet ingredients.The dough will get very thick and you may need to continue mixing by hand until everything is incorporated well.Scoop dough balls with 2 tablespoons of dough for each cookie.Place balls on prepared baking sheet 3 inches apart and then flatten each cookie out slightly by hand.Bake 7 to 10 minutes.Cooking time will vary depending on the thickness.Allow cookies to cool for 3 minutes before removing to a wire rack to let cool completely.
For the filling:Beat butter for one minute until light and creamy.Add powdered sugar and mix for 1 minute or until incorporated well.Pour in milk and vanilla extract.Mix for 3 or 4 minutes until fluffy.If your filling seems way to thick to spread add a little more milk.Spread filling on the bottom side of 1/2 the cookies then top with another cookie right side up to make a sandwich.Cookies can sit out at rooms temperature in a sealed container for 2 days and then refrigerated for longer periods of time, but are best eaten within the two days.

Email ThisBlogThis!Share to TwitterShare to FacebookShare to Pinterest
Labels: Sweets

Looking For A Recipe? Search Here

Have my recipes sent to your E-Mail