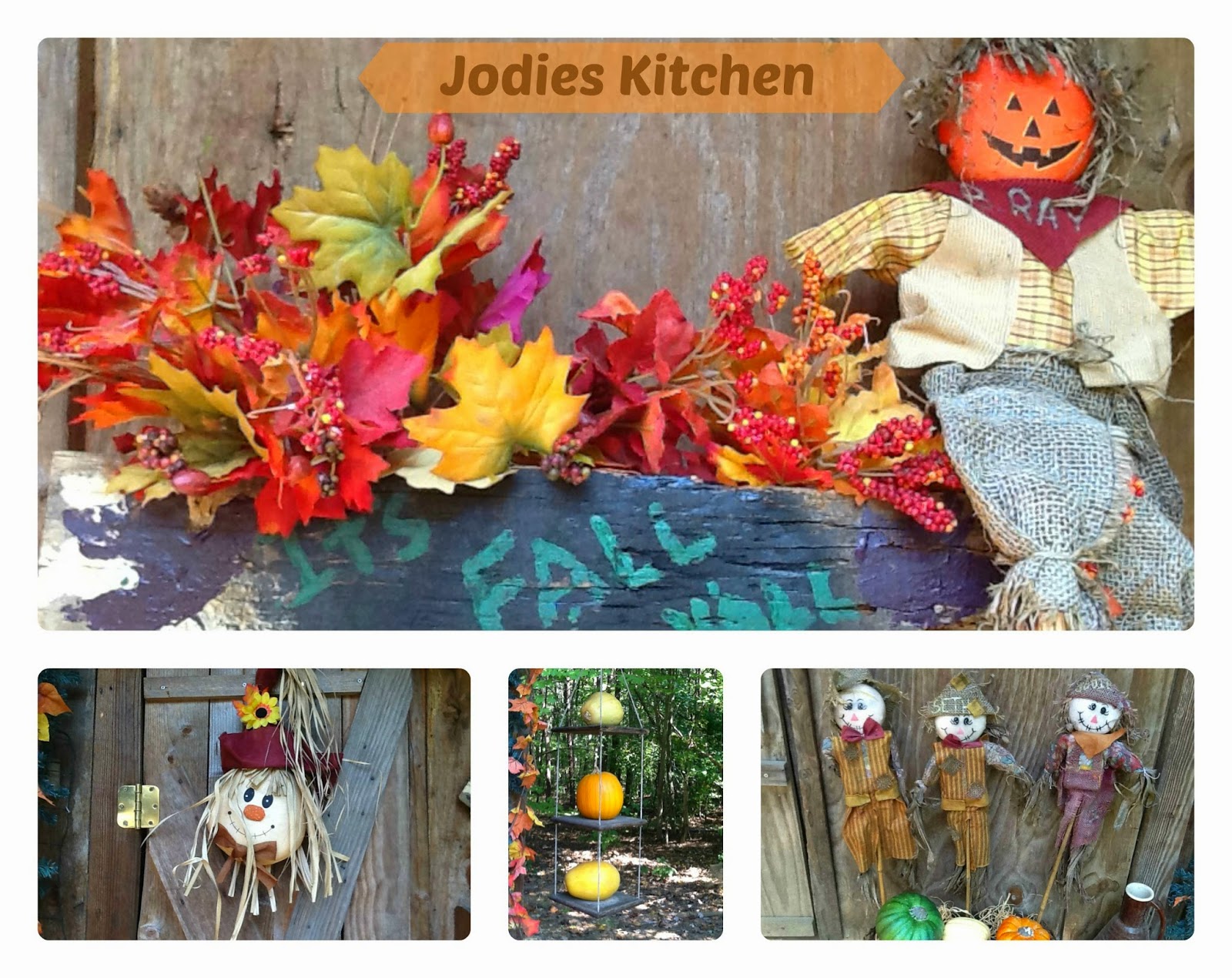 ﻿
Like many of you, fall is my favorite time of year, we all know the reasons why.
Beautiful colors bursting with burnt oranges, deep reds, vibrant purples and gold everywhere we turn.

Maybe fall is your favorite because you can have your first fire, pumpkin muffins with coffee or maybe, you just like wrapping up in a soft comfy blanket with hot tea and a good book.

All those reasons sound pretty good to me, but I have a few others as well.

I always loved decorating the inside of my home this time of year, but recently got into decorating my chicken coop....I know I spend way to much time on pinterest seeing so many cute ideas, that's where it all started I guess.

Decorating my coop for fall was pretty easy and very cheap because I already had almost everything I needed. 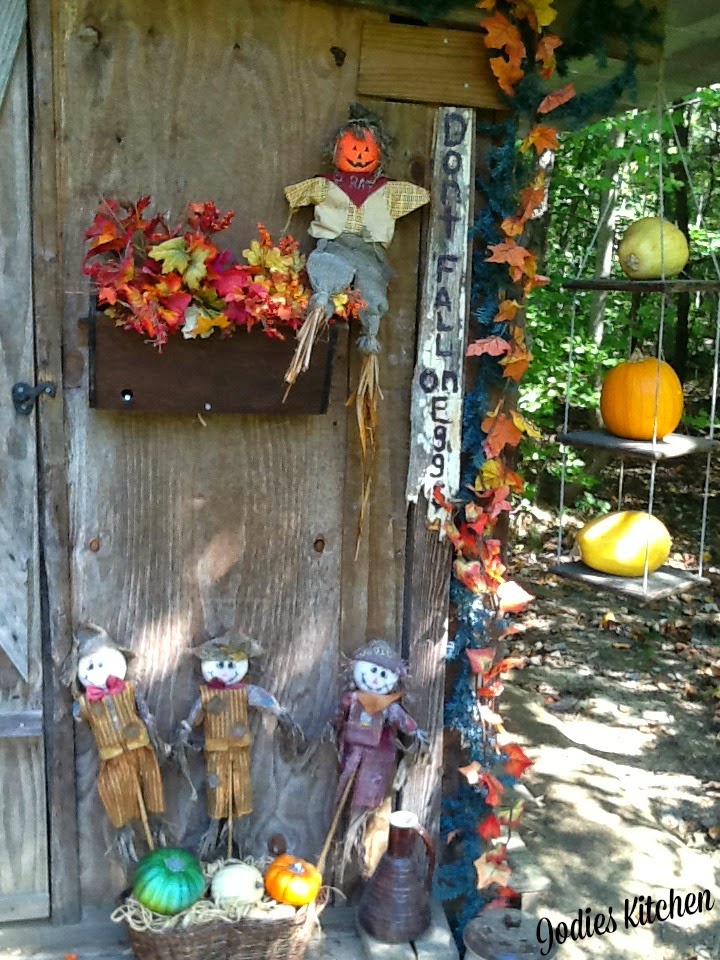 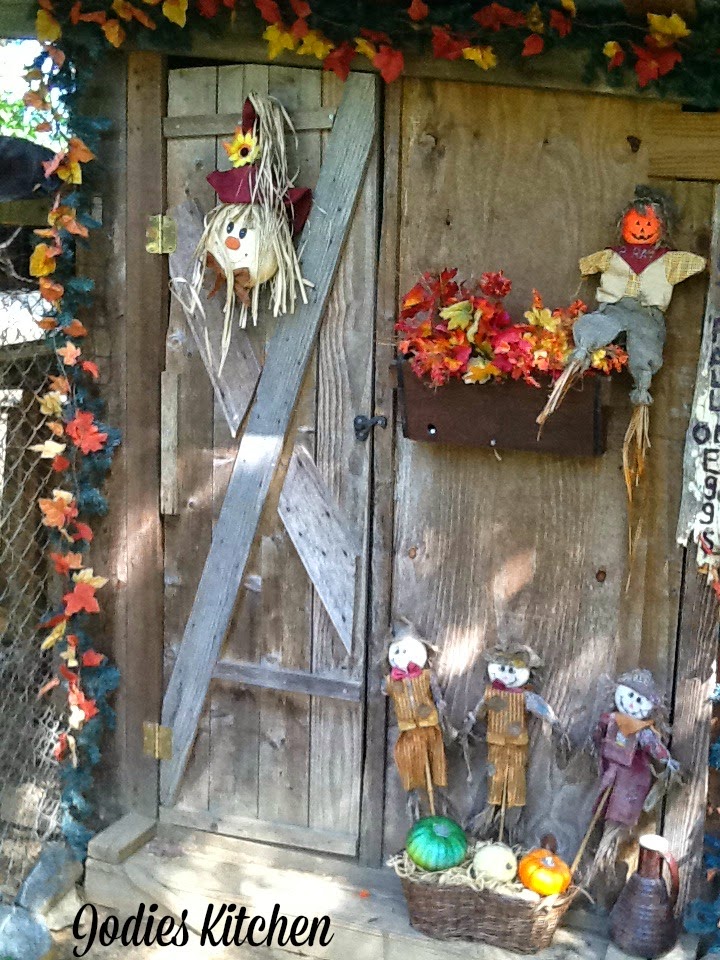 
I had to switch things around a few times and even remove some things until I had it just the way I wanted.

Like with my It's Fall Y'all sign which really needed to be redone anyway.
I had originally taken an old piece of wood and painted part of it with chalkboard paint so I could change up the saying. After a good rain I realized it wasn't practical having it outside (the chalk came off). So last year I painted it with a permanent saying. I am still not happy with the sign and will redo it again at some point. The lettering wasn't very clear, and I would like to change that along with my other sign. 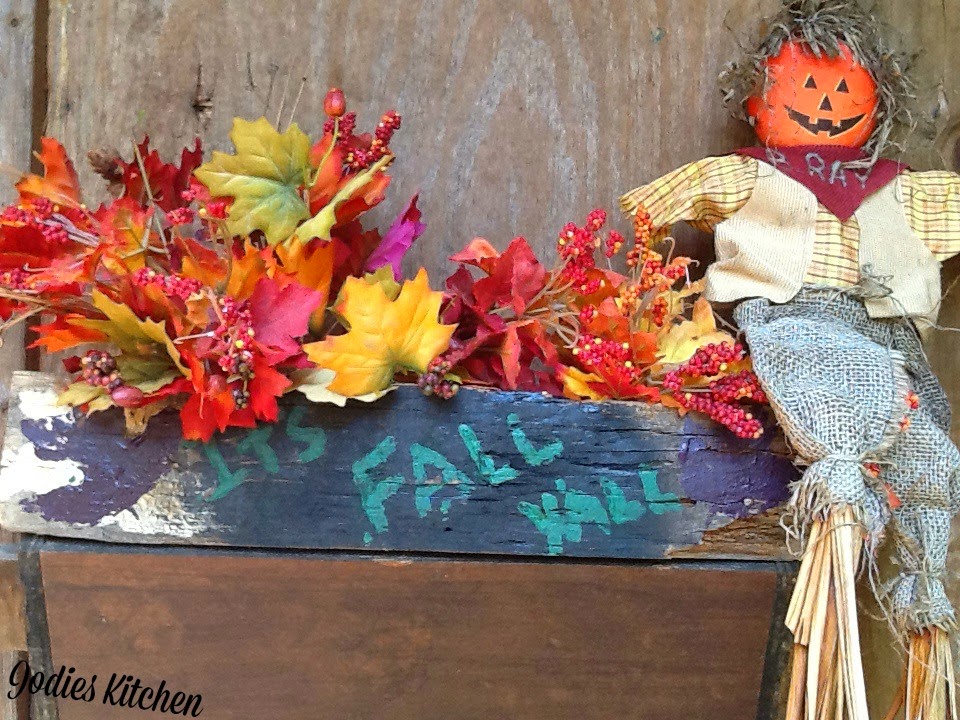 I ended up removing the sign because once I stepped back & looked at the coop as a whole, I just did not like it. 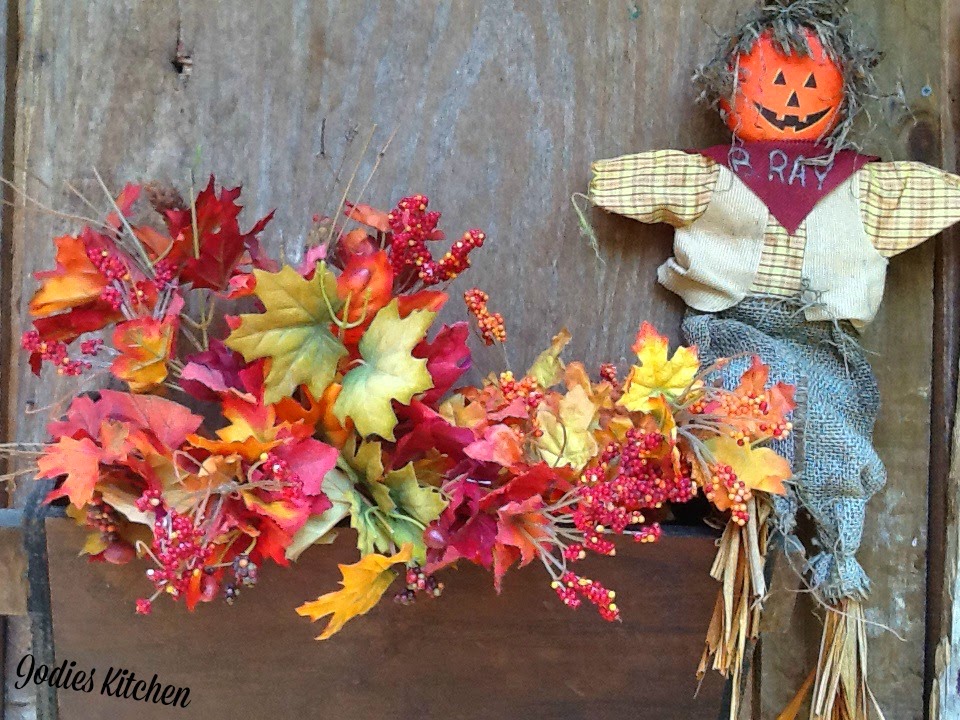 B Ray, The Scarecrow pictured above is simply propped up with the top of his head attached to the coop by a small hook.
The flower box holds artificials I bought probably 9 years back at the dollar tree when gathering decorations for my wedding..That's a whole other story, I bought so many things and ended up using fresh flowers from the florist and using artificial sparingly.

Speaking of the Scarecrows   It's a whole family of them 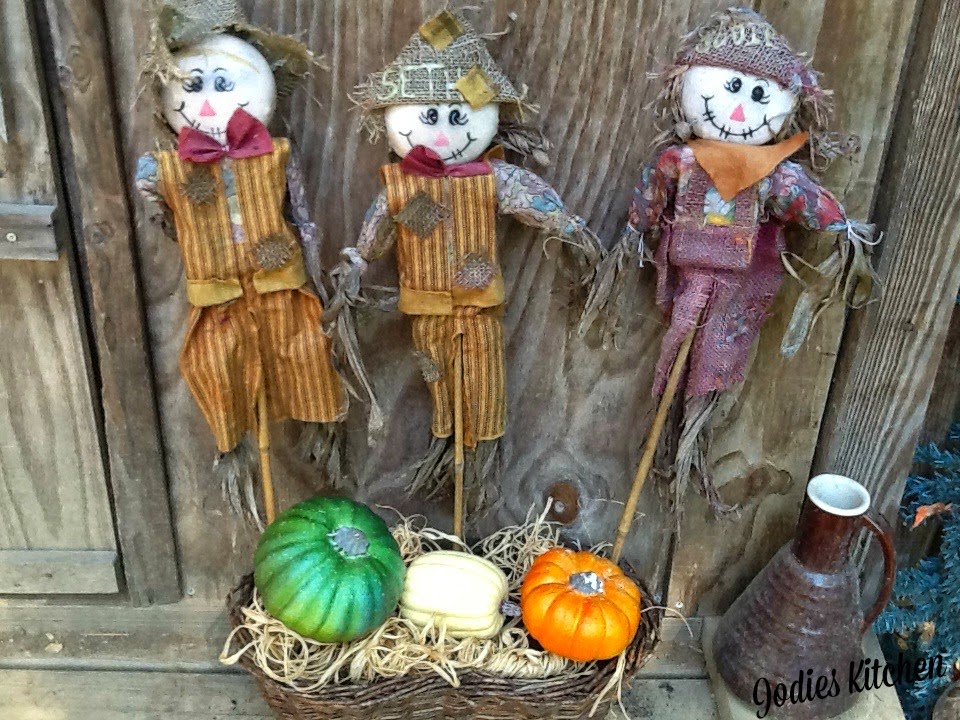 My scarecrows are also a grab years ago from the dollar store possibly dollar general this time, and if so I would have gotten them at the end of the season when they were marked down.
When I first purchased them I decided they should each have a name representing my family.

I used glow in the dark fabric paint and added the names to the hats.Very cute the first year when the names glowed in the dark. By the second year they didn't glow any longer. Some of the fabric paint has came off as well, but that's fine,it gives us all character I think.

I nestled these scarecrows into a planter box which contained raffia and some artificial pumpkins. The planter has dirt in it, so inserting the sticks into that worked well. The pumpkins and raffia ...BINGO you got it...Dollar store AGAIN! 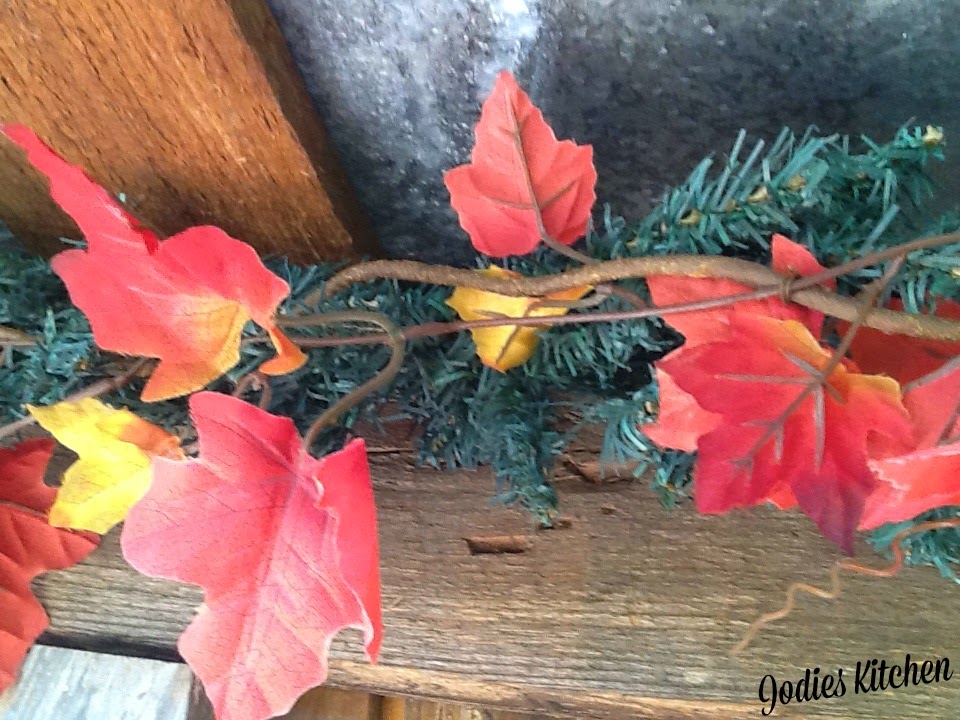 I leave the green garland up year round and was purchased after Christmas one year. I incorporated the leaf garland around the outside of the coop just by twisting the two together. It can be easily removed when fall is over. It took several pieces to do the coop and I did have to sacrifice these from the inside of the house.They are one of my favorite things to decorate with because they hold up so well from year to year and can be fairly inexpensive depending on where you purchase them.

There was one big issue I had to work out.
The fresh pumpkins!
If you have chickens then you know how they love fresh pumpkin's.
As a matter of fact the day my In Laws brought over a load from their garden, I had them just sitting on the front porch. Later that day my little guy kept saying I hear a funny noise. After a while he peeked out the blinds and he started shouting THE CHICKENS ARE EATING THE PUMPKINS!
I quickly ran outside, scared them away and brought them inside.
THE PUMPKINS...NOT THE CHICKENS
I honestly had no idea at first how I would ever be able to use the fresh pumpkins around the coop. I was thinking right off they had to be off the ground.
With that being said, since chickens can fly, I knew it was a risk.
I went on a search in my garden shed and ran across the old hanging planter.
It was given to me by a lady who gets wood from us. She said it had been her Mothers and had been stored under the house for years. She was cleaning out and asked if I wanted it. OF COURSE I DID.I love hand me downs. I used this planter a couple years outside with live plants but hadn't used it at all this year. I decided to hang it under the roof of the coop and now I am keeping my fingers crossed that the chickens will not discover my fresh pumpkins.

You may not have a coop to decorate but I hope you will be inspired to decorate something
A Porch
Mail Box
or even a
Dog House.


This was such a fun project for my little one and I
It was a beautiful fall like day that we spent some great mommy son time together.
I enjoy decorating my coop for my favorite time of the year, and I will enjoy this until December when it's time to decorate for Christmas. 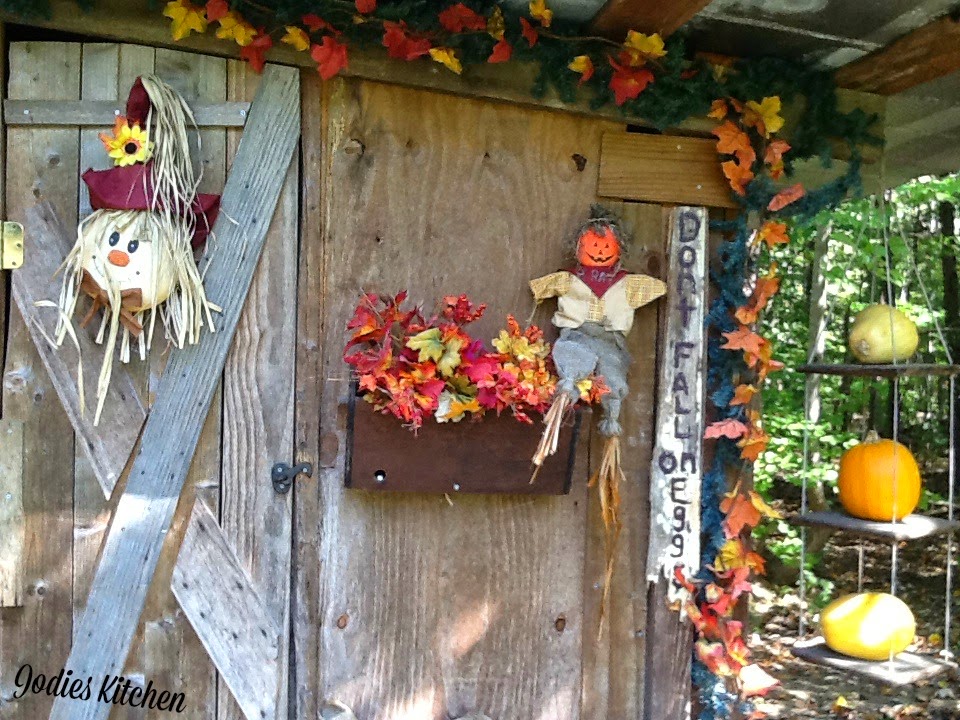 Posted by Jodies Kitchen at 6:26 AM

Email ThisBlogThis!Share to TwitterShare to FacebookShare to Pinterest
Labels: Articles

Looking For A Recipe? Search Here

Have my recipes sent to your E-Mail